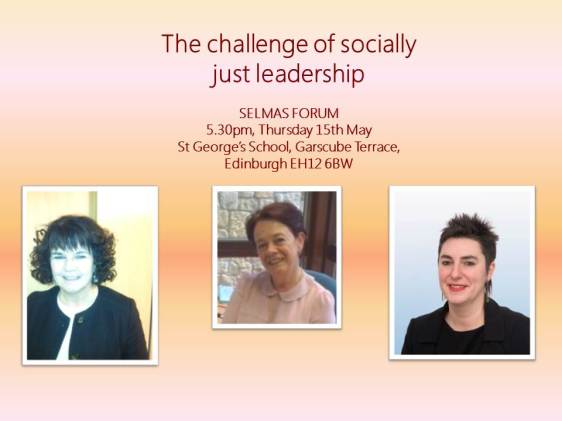 The SELMAS Forum is totally sold out. That’s a result of the attractive line-up of speakers as well as of the popularity of SELMAS events. The evening starts at 5.30 pm with registration, drinks and chat, with the formal event starting at 6.15. We very much look forward to welcoming you to St George’s.

Anne Marie McGovern has worked for over thirty years in primary education in some of the most deprived areas identified in the Scottish Index of Multiple Deprivation in Glasgow City. For the last eighteen years she has been a headteacher in Easterhouse in two different schools. She has led each of these through very successful HMIe inspections. Her current school, St Benedict’s was evaluated as excellent across five quality indicators including leadership. In 2007-8 she was given the opportunity of a secondment to work at Directorate level within Education Services as an Area Education Manager for the South East of the city. In this role the Education Managers worked very closely with their Social Work colleagues to improve the outcomes of the young people of Glasgow. Since choosing to return to her school Anne Marie continues to embrace the changes in Scottish Education and the new curriculum, working with colleagues in other services and community groups to improve the life chances of the young citizens of Easterhouse.

Rosa Murray took up appointment with the General Teaching Council for Scotland in August 2004 where she is responsible for promoting and developing Professional Learning and Development Programmes for teachers in Scotland. Recently Rosa has been involved in the development of Learning for sustainability within the Professional Standards and in schools, Previous to this current post she was the Principal Teacher of Religious and Moral Education at St Augustine’s High School. During her time there she was seconded for two years as Development Officer for Religious and Moral Education at the Education Department of Edinburgh City Council. She has also undertaken secondments with SQA and the Scottish Government. She is also a regular contributor to Radio Scotland’s Religious Affairs Broadcasting Programme ‘Thought for Today’ where she provides reflections, from a spiritual perspective, on current events and issues around the world.

Anna Fowlie started with the SSSC on 2 November 2009. Before that Anna headed up the Scottish Government team improving outcomes for Looked After Children. In that role, she worked closely with local authorities and other services to raise awareness and aspiration for children and young people in public care. Anna came to that post from COSLA, where she was Team Leader for Children and Young People, lobbying on behalf of local government on all policy issues relating to education and children’s services with a lead role on the social services workforce. She worked within the Employers’ Organisation role in COSLA, across all local government negotiating bodies. Brought up in Inverness, Anna has an honours degree from Edinburgh University in the History of Art. She is a Chartered Member of the Charted Institute of Personnel and Development and before coming to COSLA worked for 18 years in HR in local authorities.

We very much look forward to welcoming them and all our guests to the forum.

SELMAS is grateful for the support and sponsorship of the Scottish Government.